We often shine a spotlight on racism in regards to police brutality, but let me accentuate where we see it most. Allow me to call your attention to where the biggest racial divide lies but is discussed in a whisper rather than with a bullhorn. Let’s focus on an area where racism exists, but we are forced to “accept it” without dispute due to life’s circumstances. Financial, home, & personal responsibilities restrict us from defying our superiors.

RACISM IN THE WORKPLACE

Get a job they say, but let’s talk about how difficult it is to thrive in Corporate America, an office setting, or a career with underrepresentation of people of color. Let’s explore how our assertiveness is falsely identified as aggressive.

“Does my haughtiness offend you? Don’t you take it awful hard ’Cause I laugh like I’ve got gold mines Diggin’ in my own backyard.”

Let’s discuss the complaints that have been made for HR to take affirmative action but we’re brushed off as us being sensitive–“I’m they didn’t mean it that way.” Let’s bring to the forefront the policies & procedures that are strategically implemented by corporations to create indirect racial tension accompanied by what they believe to be inconspicuous discrimination.

Is it required of us to dim down our blaring confidence for those who are uncomfortable with self love? Are we supposed to overlook or pretend to be oblivious to the mistrust of our superiors, Executive team, or directors when a task is given to a person lighter in skin tone? A task in which, we are more than capable & equipped to complete. A task in which we have been thoroughly trained & qualified, if not more qualified than our counterparts to accomplish. Are we not supposed to acknowledge when a project was initiated by us, but seized from our grasps & completed by another just to ensure we don’t receive the credit? Do we turn a blind eye to the substantial differences in salary even with equal experience or degrees? Are we supposed to neglect the subtle hints of anticipation for them to find flaw or error in order to validate their misinterpretation? Is it expected of us to ignore the lack of training & inaccessibility to the tools needed to warrant success in our position? Do we dismiss the blatant difference in task/job preparation while we are taught the bare minimum to complete our jobs in effort to make certain that we do not overachieve? Are we required to consistently maintain a particular vernacular to display our level of education while others merely speak in colloquial terms? Must we have to prove ourselves worthy daily just to sustain a stable career? Do we just look in the opposite direction & disregard the apparent disdain? Do we deafen our ears to the condescending tones used in conversation towards us? They place us in these constricted choke holding situations, yet expect us to breathe easy enough to thrive.

“Does my sassiness upset you? Why are you beset with gloom? ’Cause I walk like I’ve got oil wells Pumping in my living room.”

HUMAN RESOURCES IS NOT HUMANE

Let’s be honest.  Realistically, half of the jobs we qualify for, we are never even given the fair opportunity of an interview, yet the companies wear the EEO badge with honor; all while concealing the truth. Certain names, regardless of certifications, credentials, degrees, or experience will never slide across the desk of the HR director. The cycle seems to remain the same amongst African Americans. The application will get lost in the shuffle, & the job will be given to a less melanated person with only half of the required or preferred credentials. Do our degrees not hold value? Do our achievements not merit reward? Or does the race associated with the formal education counteract the intelligence? Why it is that White Collar America misperceives correlate being black with being ignorant? We are considered to be unsuitable for positions simply by the check we place in the race box. Preceding employment, Black Americans face hiring discrimation and involuntarily relinquish jobs most likely traced back & attributable to race. During my research on this topic, it was discovered that experiments and studies have exhibited that resumes submitted with a more “black sounding name” received significant fewer callbacks for interviews for employment than those with more “white sounding”/ Caucasian names, even when the individuals had indistinguishable credentials. Continuing with my research, it confirmed my beliefs & turned them from an opinion to a fact. In a scholarly written by Dina Gerdeman, it was discovered that even when business organizations, corporations, & business firms use terms such as “pro-diversity,” or “equal opportunity employer,” or  phrases like“minorities are strongly encouraged to apply,” masses of minority applicants conjure up the wrong idea that it’s safe or acceptable to disclose their race on their resumes—only to be declined later for the job. Lisa Bryant, an educated & degreed black woman, discloses that companies are most likely to recruit & employ individuals that they believe mirror their core values, reflect their culture, and who they can be comfortable with, but also look like them; which in most occurrences, those people are white. 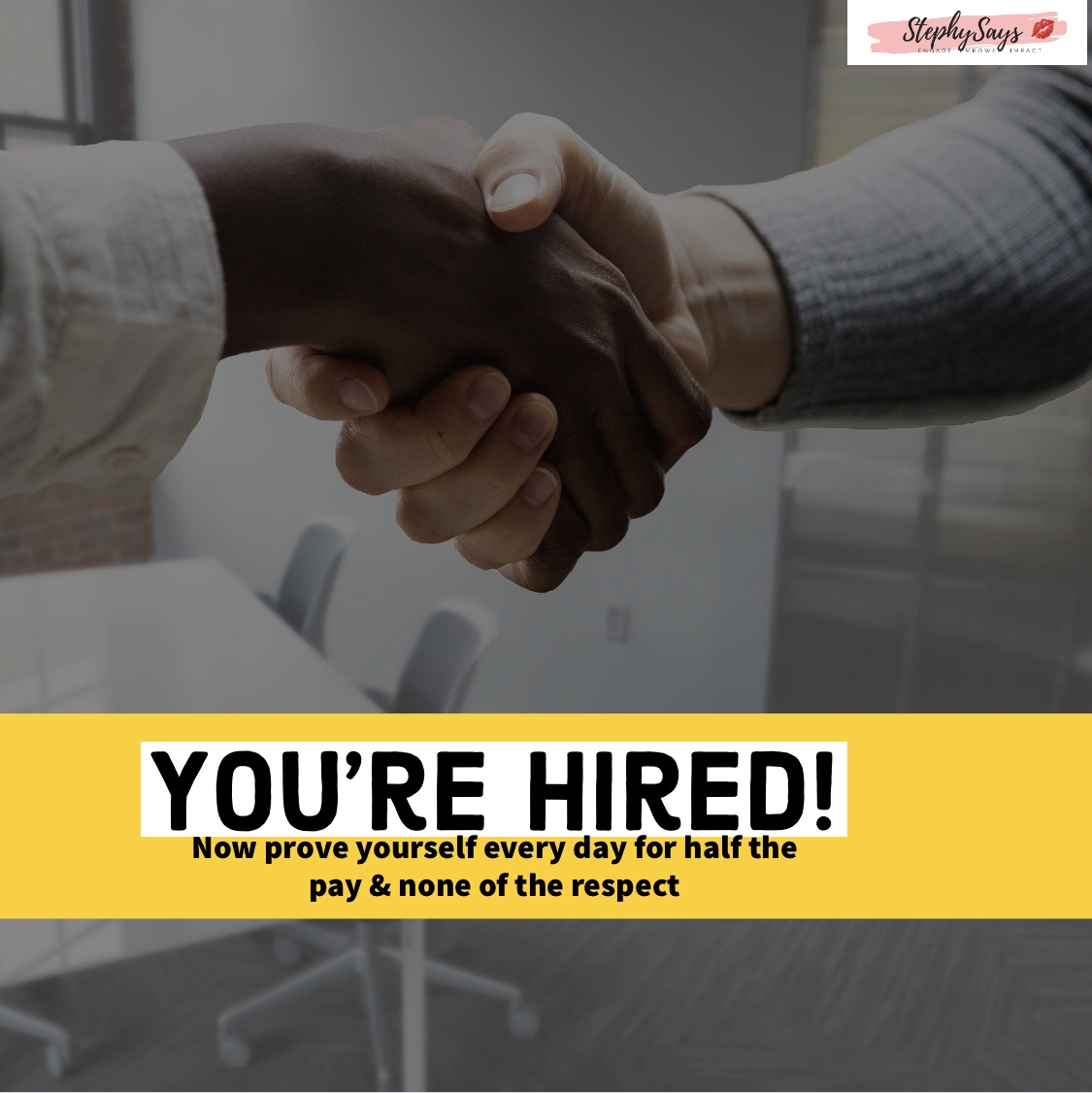 Even after hire, we are placed into a competition that we weren’t even aware we signed up for, as if the job market isn’t competitive enough in itself. Our work ethic can be the best in the company, but the sad truth is –we never measure up. Perhaps, the measuring tool of success are different. As a black American, we have to make twice the effort to receive a quarter of the appreciation & gratitude.

It is expected for us to change our image, our clothes, our speech, our tone of voice, our disposition, our statue, & our dialect just to appease those around us that are apprehensive & uncomfortable with our existence.

Racism extends beyond Black Lives Matter. It expands beyond blatant police brutality and Ku Klux Klan lynchings. Legally. segregation “ended” years ago, However, segregation still discreetly lingers in places it may be least expected. It stretches into the Human Resources Departments of major corporations and paramount firms. It drives unethical business actions and decisions.

Being a black face in white collar America is equivalent to the knee of a cop on George Floyd’s neck. WE CAN’T BREATHE.

Regardless of what people of color endure, I wouldn’t want to be any other race. Being black is a BIG FLEX 💪🏽! “And that’s on Mary had a little lamb.”

5 thoughts on “A BLACK Face In White Collar America”